The Ravenmaster's Secret by Elvira Woodruff

The Ravenmaster’s Secret by Elvira Woodruff

Forrest Harper’s father is Ravenmaster in the tower of London, and each day Forrest helps him to feed the birds, and guard the prisoners in the tower. Forrest often dreams of leaving the small confines of the tower grounds to go on adventures, to show the boys around him that he is brave, yet he remains stuck attending to his duties in the tower. Then news comes that Scottish rebels are going to be kept in the tower. Forrest is sure that guarding a huge Scottish warrior will show that he is brave, but it turns out that he guards a young girl his own age named Maddy. As he learns more about Maddy and her beautiful homeland they become fast friends. Then Forrest learns that Maddy is going to be executed. She claims that she is innocent of any wrong doing, and Forrest has to decide what is the right thing to do. Should he commit treason against the crown and help her escape, or let an innocent girl go to her death?

I picked this book up because I thought the setting really sounded cool, and besides that I really like Ravens. And what Ravens are more intriguing than those kept at the Tower of London? Though the Ravens in the Tower are more background characters than anything. Though Forrest does have a pet Raven that is sort of crucial to the plot in a few places. I sort of felt Forrest came to trust Maddy too easily, and didn’t relate to her as much. Forrest has a friend Rat that got sold to be a chimney sweep to a bad master, and I rooted for him more than I did Maddy, and I thought he was a cool character. So while I enjoyed this book it really wasn’t my favorite even though it was set in an interesting historical setting.

Author Elvira Woodruff's Website
Posted by Gamila at 10:39 AM No comments:

At Journey's End by Annette Lyon 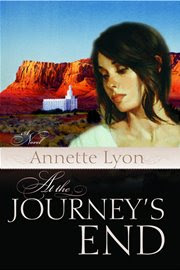 At the Journey’s End by Annette Lyon

Abe Franklin has never felt comfortable among Mormons, being an adopted Indian has made life hard for him, and he always feels like an outsider. After a mob of saints hangs a black man before he can go to trial for shooting a bishop, Abe decides he has had enough of the hypocrisy and longs to get out of Utah. He convinces his mother to come with him when he finds them a new home, but she gives him one condition. He must find them a place where the saints are strong. So, Abe sets out to California, and finds himself, through an unlikely series of events, settling in Snowflake, Arizona.

There he finds a young school teacher named Maddie, who catches his eye when she recites a poem. She struggles to let go of the love she had for her fiancé, who was murdered, and love the man she is currently engaged to. She must decide if she will settle for a good marriage of convenience or take another chance at romantic love. Abe and Maddie form a bond, but Abe cannot make the mistake of falling for a good Mormon girl twice. He knows that his feelings about the church will lead to their eventual misery. So, unless Maddie can help Abe realize, despite the harshness of his upbringing and bitterness toward the saints, that he believes in God they will both lose love for a second time.

I had a hard time getting into this book at the beginning. I suppose I didn’t relate to Abe and Maddie as well as I did to Lizzy in Lyon’s previous book House on a Hill. Abe seemed to be too modern minded for the historical time period and that threw me off. His first point of view chapter felt too preachy for me to really get sucked into the story at the start, but I ended up enjoying his character later on. I also felt for Maddie as she tried to heal from the death of her fiancee. While on the surface this seems like the typical LDS romance plot—girl converts boy to gospel and they marry—Lyon’s characters have layers that made it feel unique and fresh. I liked the fact that Abe wasn’t converted the “traditional” way, as in reading and praying about the Book of Mormon. He had a unique history and set of challenges to overcome in order to accept the gospel and the conflict was interesting. The author spent of lot of time building an honest emotional bond between Maddie and Abe that really makes their love story special to the reader.

In contrast to House on the Hill, this book in not about the construction of the St. George temple, but about those who sacrificed to travel to the first completed temple to make sacred covenants there. Some humorous anecdotes about the building and history of the temple are shared, but they dance in the background of the story. This ended up being an enjoyable read for me, and I’m glad I finally sat down and read it since I read House on a Hill ages ago. In would recommend both books to readers interested a good, clean historical romance.

Visit Annette's Lyon's website to find out more about her books.
She also has a fabulous blog at Lyon's Tale.
Posted by Gamila at 10:34 AM No comments:

Pendragon 8: The Pilgrims of Rayne by D.J. MacHale

Pendragon 8: The Pilgrims of Rayne by D.J. MacHale

If you aren’t already familiar with the Pendragon series then this post my contains spoilers because The Pilgrims of Rayne is the eighth book in the series. Go find out more info at D. J. MacHale’s official website.

In this latest installment of Pendragon Bobby finds himself on the Island Paradise of Ibara. He looks for the signs of chaos and violence that usually indicate St. Dane’s presence. He comes to find that the people of Ibara are sheltered from their true identity by the village elders. Bobby joins up with a local gang to find out the truth of the situation. They steal a boat from the harbor and head off towards the mainland to find that Ibara is in grave danger because St. Dane has organized an army headed strait for the island. In order to win a battle with against such enormous odds Pendragon has to break the number one rule: don’t mix items between territories.

So, this book wasn’t one of my most favorite Pendragon books. I did like it better than the fourth book though, and that one is my least favorite. Mostly I didn’t like it because Pendragon broke the rules and that just irks me. I know it really shouldn’t cause that author shows the consequences of not following the rules, but it did. The usual action packed adventure ensued, and I really liked all the twists and turns this novel brought. Especially, the twists and turns with Mark and Courtney plotlines. I never expected when the series started that Mark and Courtney would become such well developed characters, but I really think they have an interesting part in the story. As usual I loved meeting the new characters on Ibara and exploring a whole new world.

So, if you haven’t picked up this series you should, it is great for both boys and girls. Probably leans more towards the boy audience, but there are plenty of strong female characters for girls to cheer on also. This series has a little bit of something for everyone.
Posted by Gamila at 7:05 PM No comments:

Life in the Pit by Kristen Landon

Life in the Pit by Kristen Landon

Brittany watches from behind her cello in the orchestra pit as her friend Amanda charms the crowd, star of the high school musical. Just like she charms the boys around her with her flirtatious and confident personality. Amanda seems to have a new boyfriend every week, while Brittany finds boys hardly ever pay attention to her. Instead when boys find out that Brittany is Amanda’s best friend they often try to use her to get a date with Amanda. So, when she finds out someone actually likes her, and only her. She is suspicious. Especially, since the boy is the co-star in the musical with Amanda. Then Brittany starts receiving anonymous notes threatening her friend. Amanda starts receiving the notes too, and Brittany starts to worry that her friend might be in serious danger.

I like the fact that the main character plays in the orchestra pit, because it gave Brittany something she was really good at, and gave the book an interesting angle. I think it is unique to have a character playing the cello, removed from the main action, but close enough to watch it. This situation made for a few very suspenseful scenes on stage, while Brittany tries to keep an eye out for who is making threats against Amanda. I enjoyed reading this novel, and got caught up in the story and the characters. There wasn’t really anything in the book that pulled me out of the story or bugged me. That’s high praise right there! If the story sounds interesting be sure to try it out. 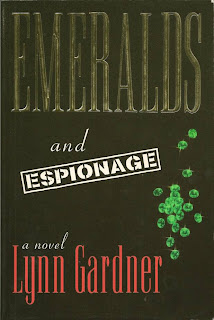 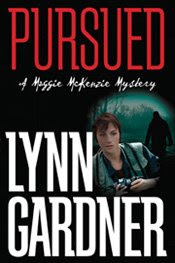 So Anne Bradshaw at Not Entirely British is giving away a copy of Persued by Lynn Gardner. So, I'm posting about the contest on this blog to enter. Because I really like Lynn Gardner's books! I've been waiting forever for this book to come out! I wondered if she had abandoned the series it has been so long! But no there is a new precious book to be had. When I was in high school I probably read Emeralds and Espinoge a million times. It is hands down my favorite of her gem series.
Posted by Gamila at 8:56 AM 1 comment: