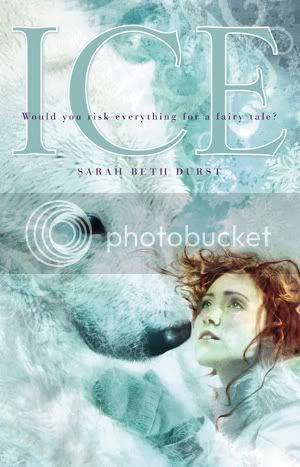 “When Cassie was a little girl, her grandmother told her a fairy tale about her mother, who made a deal with the Polar Bear King and was swept away to the ends of the earth. Now that Cassie is older, she knows the story was a nice way of saying her mother had died. Cassie lives with her father at an Arctic research station, is determined to become a scientist, and has no time for make-believe.

Then, on her eighteenth birthday, Cassie comes face-to-face with a polar bear who speaks to her. He tells her that her mother is alive, imprisoned at the ends of the earth. And he can bring her back -- if Cassie will agree to be his bride.
That is the beginning of Cassie's own real-life fairy tale, one that sends her on an unbelievable journey across the brutal Arctic, through the Canadian boreal forest, and on the back of the North Wind to the land east of the sun and west of the moon. Before it is over, the world she knows will be swept away, and everything she holds dear will be taken from her -- until she discovers the true meaning of love and family in the magical realm of Ice.”

The novel Ice is another fairytale retelling of East of the Sun, West of the Moon. I’ve already read two other retellings of this tale, and wrote a post comparing the two different novels. What I really liked about Ice was that it the point of view character Cassie felt like an ordinary teenage girl. She felt distinctly modern, and not placed in some random unidentified historical period. Yet, despite the modern feeling of the characters and the setting the author still managed to make the story have that magical fairytale quality. I also really liked that Cassie was a very strong female character, and her incredible stubbornness gets her into a lot of trouble, but also gets her through some really hard situations. I also loved how the author created her own magical world around the fairy tale. Cassie’s polar bear is a magical creature called a munaqsri, who watches over the souls of all polar bears as they enter into and leave life. The author weaves the details about these creatures into the plot and they become an important part of the story.

I have to say that I this story had me hooked, flipping pages as fast as I could to get to the end, and the ending was one of the most satisfactory I’ve read in a long time. It was just so good plot writing wise; I thought the author did well tying all of the story threads together. Though, I can understand if the ending was unbelievable to some readers. Perhaps, storming an evil troll castle while in labor is a bit hard to swallow.

One last thing, the plot had very strong adventure elements, but also has moderate romantic elements that may make really conservative readers wary. The author only describes kissing, but Bear and Cassie are married, so some of the plot centers around them building enough love and trust to have a mature romantic relationship, and all that entails. Personally, I thought the author did this tastefully, and I really enjoyed how Cassie and Bear create a loving, balanced, and partner based relationship.


Visit the Author's website for more about Sarah Beth Durst and her books.